Cultural leaders from the 39 international Cities of Literature met digitally for the network’s first online meeting (21-25 September), hosted via Zoom by Prague City of Literature.

The UNESCO Cities of Literature network brings together 39 cities across 6 continents. While the designation marks existing literary excellence within a city, becoming a UNESCO City of Literature also gives cities a place within a supportive network who share and collaborate with each other. It calls upon cities to nurture creativity, support freedom of speech, and ensure literature reaches as wide and diverse an audience as possible.

“The Cities of Literature network, which began as a bright idea in Edinburgh, is now an astonishing collection of global communities which put creativity at the heart of their cities’ future development. Resources and ideas are shared in a spirit of generosity and collaboration. It was inspiring to see such a wide range of cultures and languages united by a single mission.”

During this year's digital conference, the Cities of Literature showcased best practice and workshopped a range of collaborative projects, as well as launching their new shared website: www.citiesoflit.com

Edinburgh was also joined by Open Book as part of the best practice sharing sessions. Claire Urquhart, Director and Founder of Open Book, took the network through the organisation’s model, and shared some of the exciting work they’ve been carrying out in support of Scotland’s readers and writers. 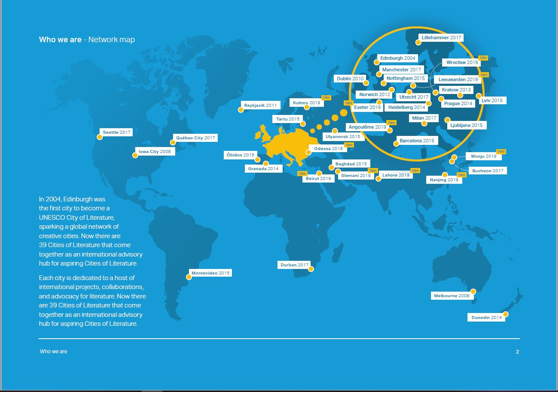 “While an online meeting cannot recreate the joyous coming together of our network members, the cultural exchange and the stimulation of creativity that a gathering of people in our beautiful city would have brought, we hope the spirit of the annual meeting will live on in this new virtual format.”

A key focus at the meeting was work being done to support recovery, resilience and sustainability for the creative community in each city, as well as working to effect positive change in the context of important social movements, such as Black Lives Matter and the global climate crisis.

“We’re actively progressing our priority areas: to improve pathways for writers, commit to translation projects and collaborate on future book fairs and festivals, and in particular to conceive solutions to worldwide challenges exacerbated by COVID-19 such as improving literacy and social mobility and promoting equality.”

Prague, originally scheduled to host the conference face-to-face, has been a member of the UNESCO Creative Cities Network since December 2014. Prague’s most longstanding and significant project is the Prague residential programme, which offers 6 residential stays annually for foreign authors and translators. Prague facilitates accommodation, travel, a stipend, and literary events and readings for the visiting authors.

Another special project, Touches of World Literature, is a cycle of author readings taking place in collaboration with Prague City of Literature and the Museum of Czech Literature, aiming to showcase global literature and its creators. The bilingual programme guarantees appeal to both Czech and international audiences. The programme also includes an artistic interpretation of the texts by professional actors.

Delegates at the conference were proud to courier children’s books from their cities to the Prague UNESCO City of Literature Office for donation to the Public Library.